We’re Fiction Tribe, an independent digital creative team that rethinks disruptive technology for brands to vigorously connect people and ideas. Our technology chops, design rigor and industry acumen combine with a shit-ton of hustle to make great work that works.

Playing it safe might get you clicks, but it won’t get you customers.

Professional huckster and amateur human being P.T. Barnum once famously said, “There’s no such thing as bad publicity.” While that certainly isn’t true, the takeaway is that the worst thing you can do is be boring. Indeed, the opposite of love isn’t hate—it’s indifference.

We’re all bombarded with marketing every day that just rolls off us like drops of rain on a taught umbrella. The meaningless buzzwords and overused icons, photography, and illustrations just add up to white noise that we have adapted to dismiss. Templated emails crowd inboxes because we’re certain we already know what they say.

The same is true for any content that follows a well-worn path. Has anyone ever been excited to dig into a hefty whitepaper or curl up with a two-hour webinar? When was the last time anyone read the headline in a banner ad, let alone clicked on it…on purpose?

We evaluate on specs—but buy on emotion.

There is often a strange approach to B2B marketing where all effort seems to be placed in listing every technical detail and feature while forgetting that a human being with emotional responses is on the other end. While it’s true that most B2B purchases happen through group consensus and logical evaluation, acknowledging how they should feel about the purchase is as important in B2B as it is on the consumer side.

This emotional touch point matters in two crucial stages: getting prospects in the door (being interested and remembering the offering), and the “feeling” part of the buying cycle that makes them ultimately pull the trigger on a potentially budget-breaking purchase. While the deep dive fills the need for evaluation, it’s the emotional part that fills the bookends between those two points.

So, how do you tap into emotion when selling something that, on the surface, is void of any sort of inherent feeling, such as a deeply technical solution?

The first thing to do is not just focus on what an offering does, but what it does for them. Further, focus on how that outcome will make them feel. This is easy to see in consumer marketing. Sneaker companies don’t sell shoes based on how many fibers are intertwined or how well the sole grips the ground. Instead, they show people doing incredible and exhilarating things while wearing the shoes. Buy these shoes, fly to the heavens and touch the face of god. Easy.

The second thing to do is stop talking about yourself. You’re not the star here, they are. Inside of us all sits a tiny narcissist. Well, sometimes it’s a big one. Social media only works because we all get a little endorphin bump when our tastes, opinions, and sometimes our looks are deemed likable by others. The topic of “me” is always going to be more interesting than the topic of “you” whether it’s admitted to or not. Tapping into that is key. Talk about what they will feel, how incredible they will become, and then you’ll have their attention.

In so many hack marketing efforts you will see the same acronyms, words, and phrases used that are so meaningless and interchangeable that they actually tell you nothing. Worse, they could easily be grafted onto an entirely different brand or product. Oh, it’s an agile solution that uses AI to automate processes and free up time and resources? What doesn’t that speak to?

Sometimes it’s tough to go beyond vague descriptions because the offering can be used in so many different ways. However, if you give your prospects a little credit for understanding analogy or extrapolating value through a use case that might not apply explicitly to what they do, you can still reach them. If you are brave enough to pick a specific use case and detail it, you might just find your audience pays attention because you showed some respect for their intelligence.

The other danger is using internal nomenclature that isn’t how your audience talks. Large enterprises (the most common offenders) can become too insulated and self-affirming to realize that their terminology might not be the terminology the buyer uses—or that their acronyms mean nothing to anyone but themselves.

It’s important to question everything, take nothing for granted, and seek a second opinion by diving into the casual conversations of those who you are selling to. You just may find they have their own shorthand, their own way of talking about things.

“Keep it simple” doesn’t just apply to UI—it applies to everything. Time is the most valuable commodity for buyers, and if you are wasting it, you’re wasting an opportunity to get to the “shut up and take my money” part.

Give them the nectar of newness

One other key is to avoid telling them what they already know. So much time is typically spent setting the stage, you’ll find that a lot of audiences lose interest because you haven’t actually told them anything new. Stop wasting their time telling them what their current state is, what their challenges are, or (worst offender of “duh”) giving them a stat that says 83% of their peers are concerned about X issue. Scrap that and just get to the point of what they can do, how they will feel, and wrap it up.

Be bold and stand out

Within a campaign or a program, you’ll have hard working content that lists the details for the evaluation phase, but make sure you also have the broad strokes in place to paint a picture that is different from one your buyers see every day. This means:

A few simple steps can keep your name in the conversation for the consideration phase and help you rise to the top on a sea of mediocrity.

Here are some cool things we’ve helped our clients do when they’ve bucked what’s expected in their marketplace.

Host Analytics (now Planful) wanted organizations to break free of spreadsheets. In a nutshell, their platform offered a better way to securely collaborate on budgeting and other financial data—which for most companies, is still populated manually and shared over email (yikes!). They wanted people to “break up” with the old ways. An idea was born: A dating quiz to determine if you were in an unhealthy relationship with spreadsheets. Spoiler: you are. 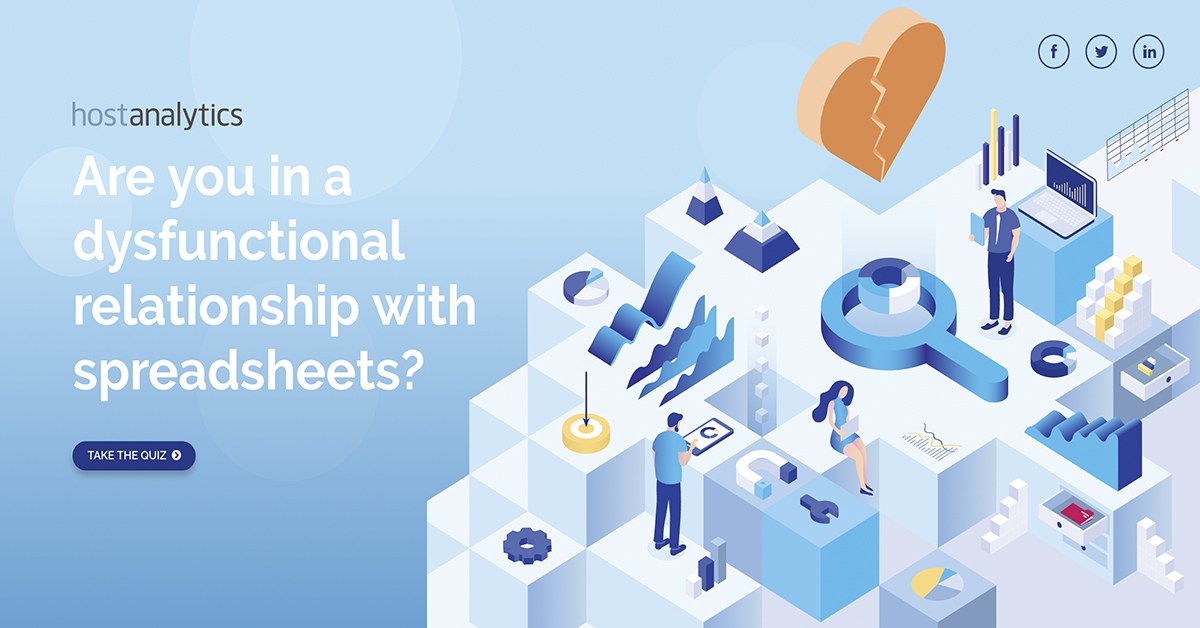 Conversica needed to help three groups do more with less when it comes to customers: sales, marketing, and customer success. Offering conversational AI to help customers without adding cost, it was important to show how the platform helps those three groups without getting bogged down in the technical details at an early awareness stage. The solution? Tell a quick story using humor to entice the audience to learn more.